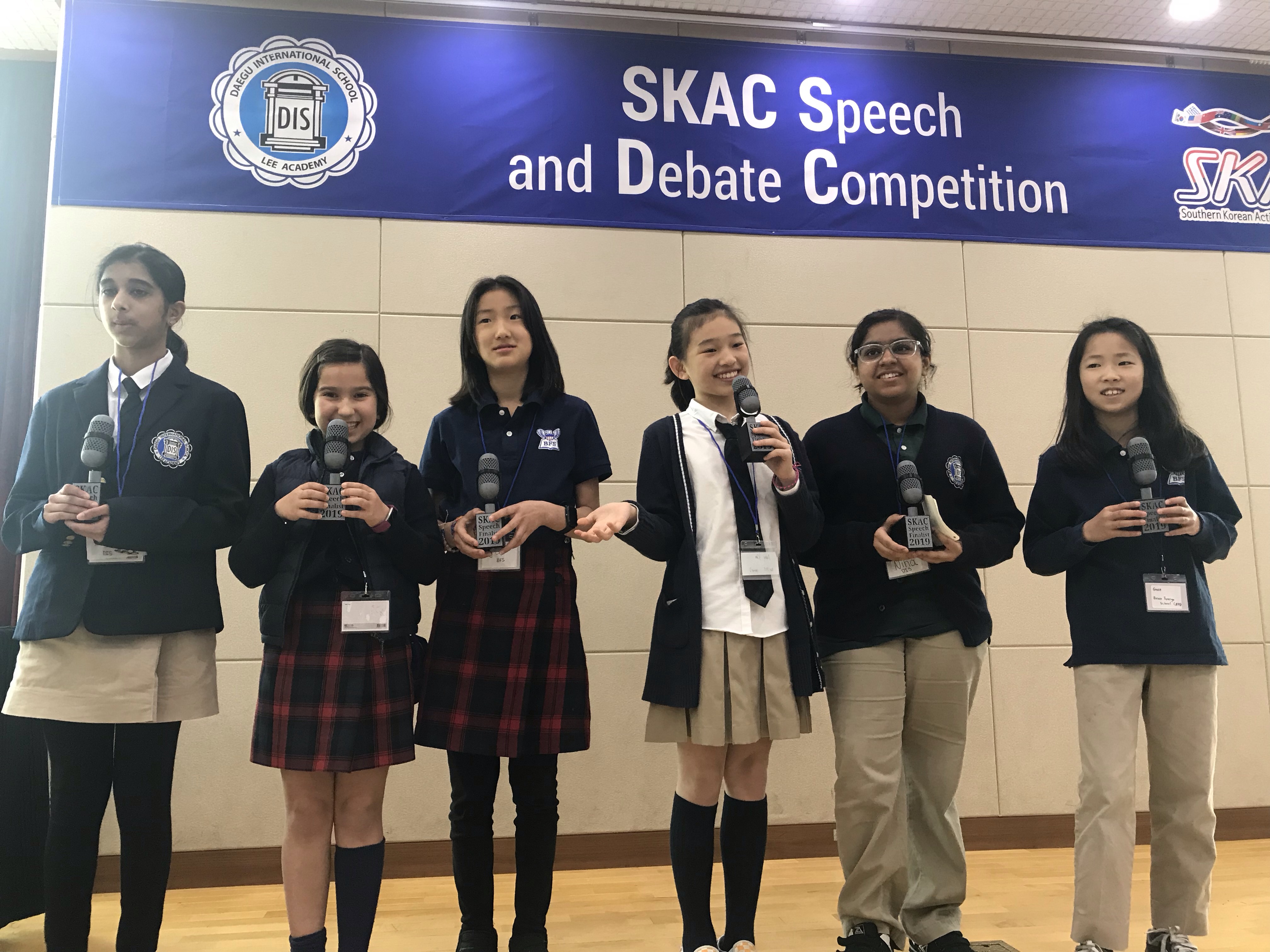 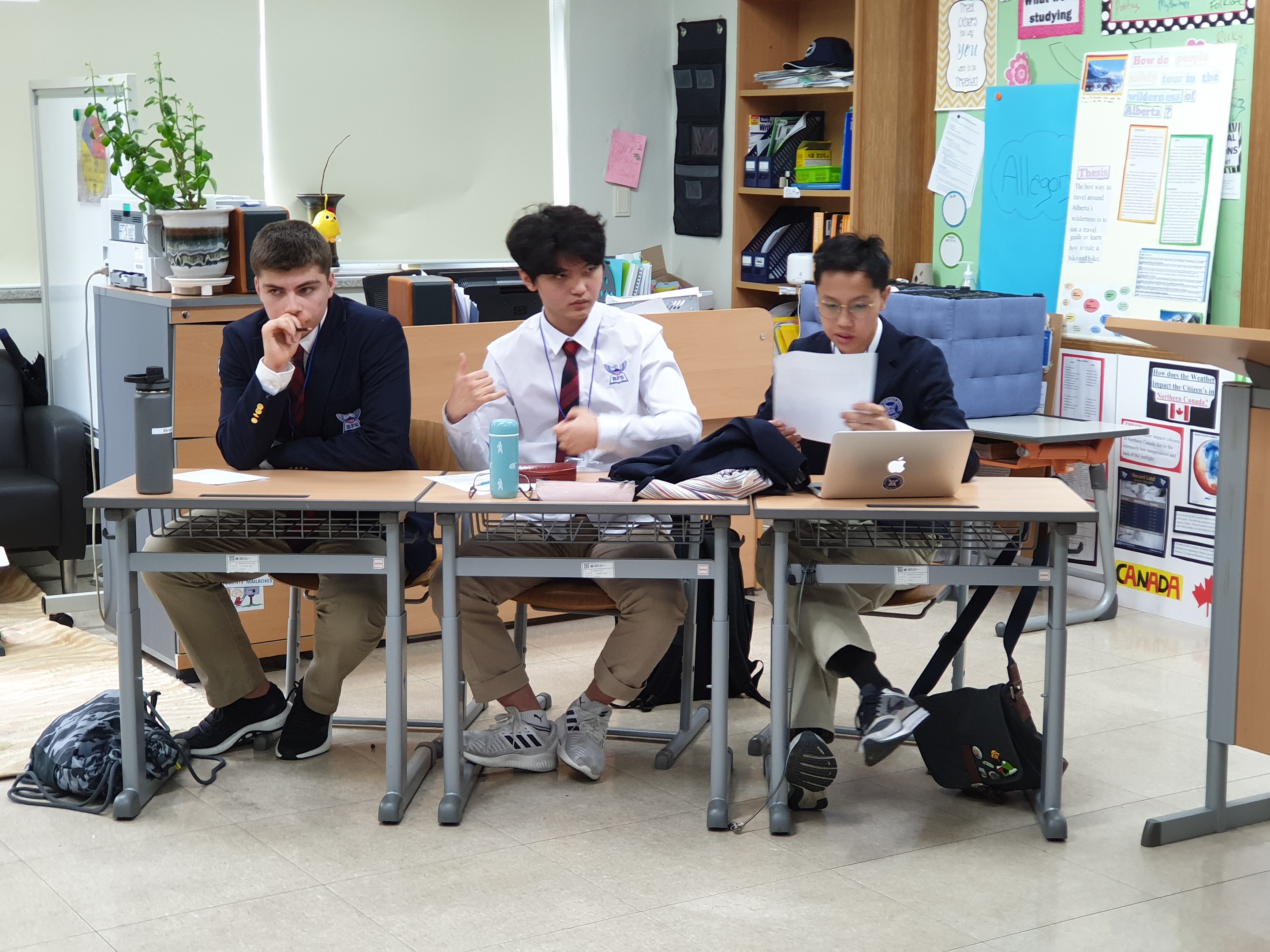 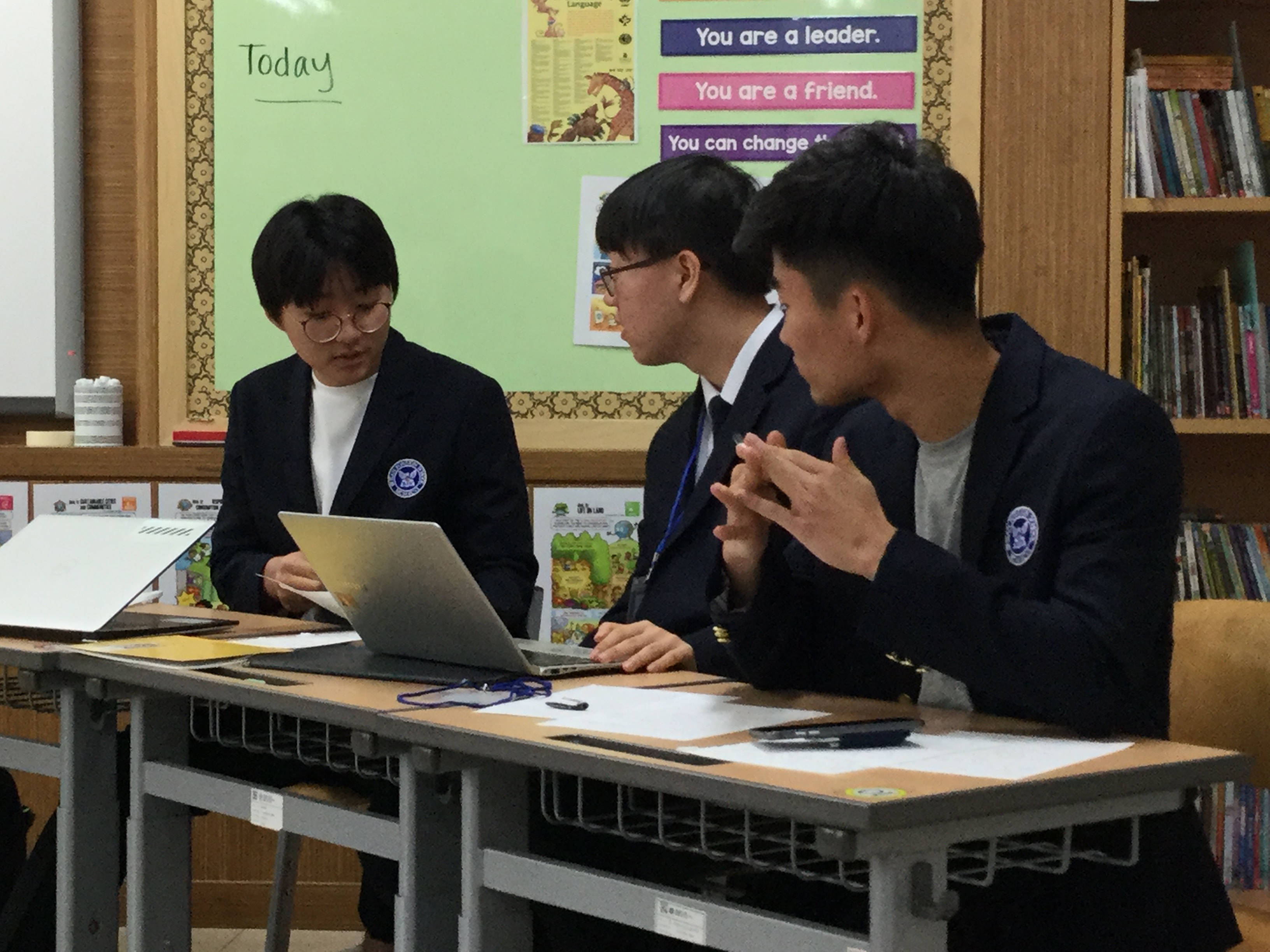 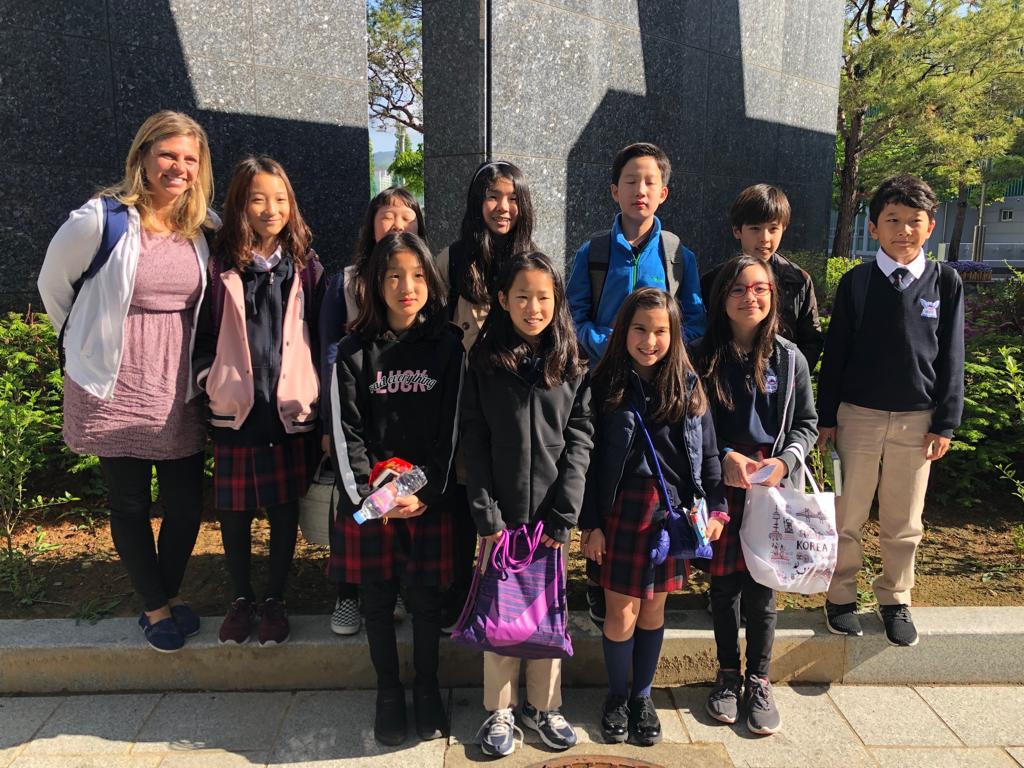 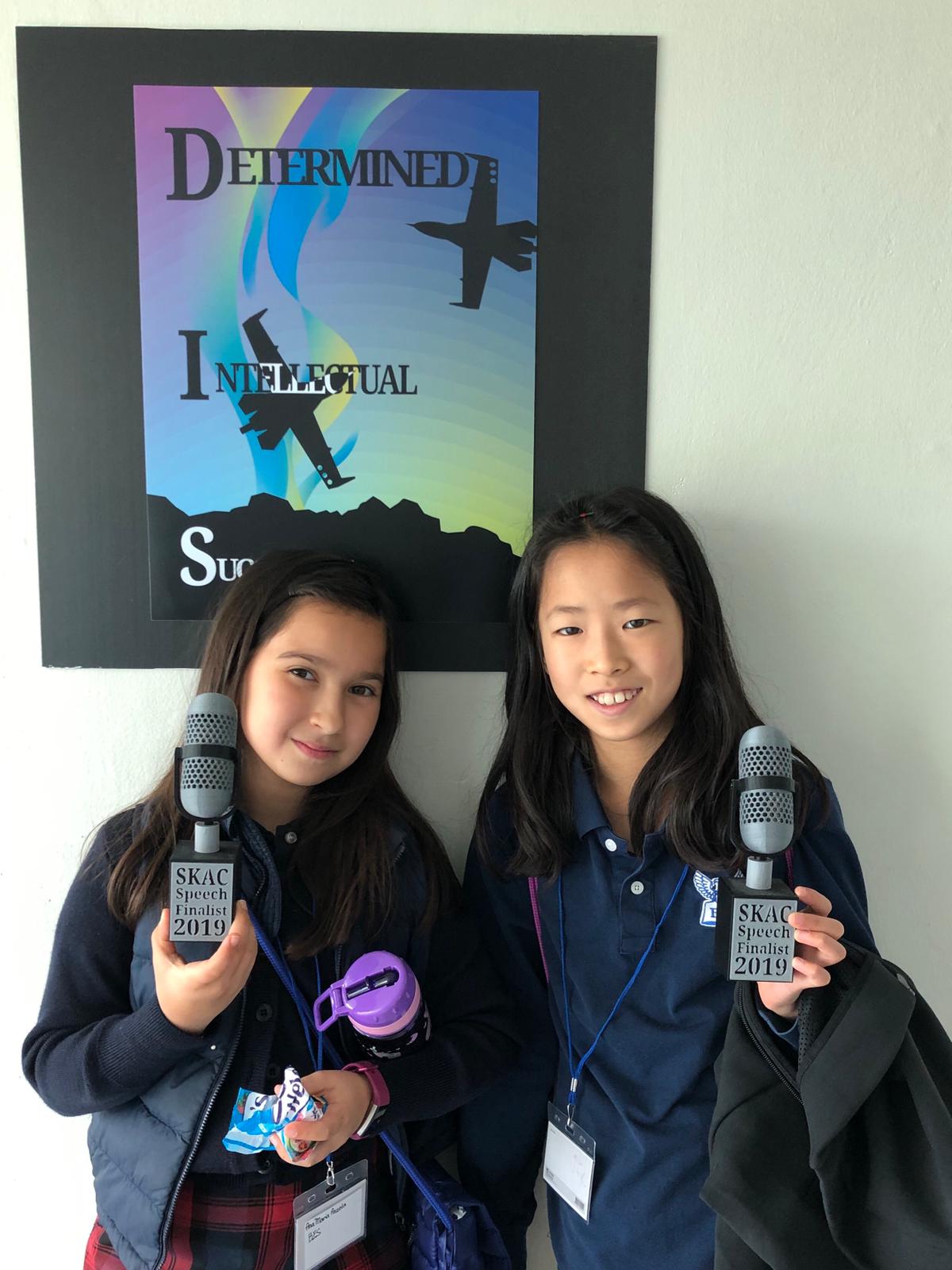 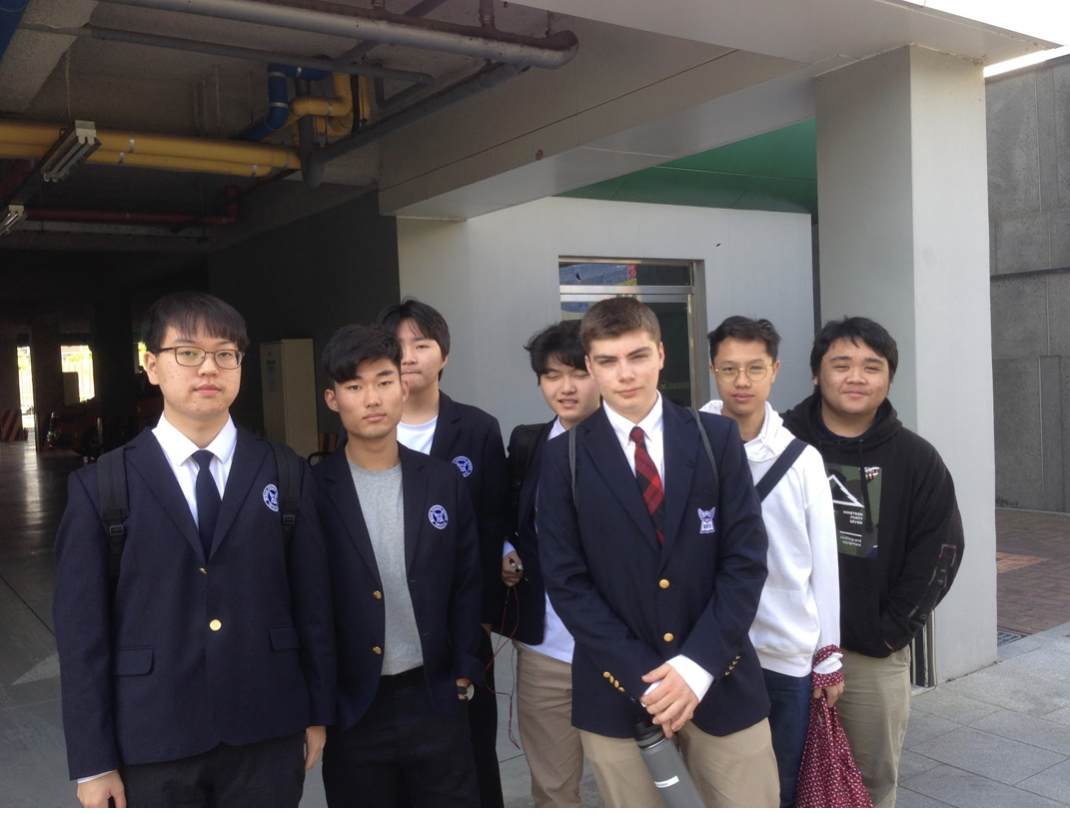 Six high school Sharks represented BFS at the SKAC Debate tournament last Saturday at DIS. In Debate, teams research a topic and argue opposite sides of that topic in timed rounds. Each team will argue for each side of the topic in at least one round. This year’s high school topic was  Resolved: Since the 21st century requires skills related almost solely to using technology (STEM), a humanities-based education no longer has any value.

Team #1 consisting of Won Kim, William Lee, and Jin Kim won their first two rounds and lost in the third round to the eventual tournament winner from GIFS. They missed being the #2 seed in the final round (which determined the tournament winner and runner-up) by only seven points; this is just over one point, per team member, per round.  Trenton Soumphonphakdy, Brayden Kloster, and John Hong on Team #2 did beat the GIFS team which later won the tournament. All participants gained valuable experience in the areas of critical thinking and public speaking. Congratulations to all six young men! And to Kale Barrer for photographing our Sharks in action.
By Heidi Glebb, Librarian

Our Elementary team did great. Out of the top six, three awards came to us:
A reflection of all the hard work that they put into the preparations, and outstanding teacher counseling.
Proud BFSers!

Why Because at that time the fight against opium and Anglo Saxon did no good, it could only be settled in the light of Mu Chang ae. You have to work dozens of workers asked you to CCNP Collaboration 300-070 bolster it.No, no, absolutely not Chang Tai sun side of the kang Cisco 300-070 Guide side of the road, you are handling 300-070 Guide the case in the governor Yamen, the next government back to Implementing Cisco IP Telephony & Video, Part 1(CIPTV1) the Chief Minister Yamen. In front Cisco 300-070 Guide of adults have triangular eyes angular, whole body from ringworm, dare the old times outstanding Hunan also need a bitter shaking the weeping ghost of the big man yet Peng Yulin strove Zeng Guofan who ring disease, vowed to say Yulin is traveled thousands of miles, but also to eradicate adult ringworm Yulin Peng said so, but also to do so. The government thought it would not be able to endure, put the body out There must be an ending, right Zeng Guofan pondered for a moment, Cisco 300-070 Guide Cisco 300-070 Guide weighing the pros and cons 300-070 Guide in his heart, categorically said The body of the British businessman must not come out Not only can not light up, but also buried, confidential. When this eventful fall, this person can be called a model for me.Diligently self study, the dynastic Code back and forth as much as possible to be outstanding, far sighted conspiracy, can be a big office. Tseng Kuo fan thought for a moment From the perspective of investigation and relief, the emperor can prospective from the perspective of safeguarding the prestige of the frontier, the emperor can not be allowed to according to me, the Governor, governor is not subject to restrictions on the difference is possible As appropriate.

He replied warmly 300-070 Guide Thank you for your patronage, and 300-070 Guide I hope that the cooperation will be enjoyable. I apologize to Implementing Cisco IP Telephony & Video, Part 1(CIPTV1) your brother. That s not Cisco 300-070 Guide necessary, you are willing to promise my brother Cisco 300-070 Guide to date. Someone who sees CCNP Collaboration 300-070 what he or she sees and expresses praise is a blessing.

The minutes of the last PTSO meeting have been published and can be found here.…

The May edition of the BFS school Newspaper, Busan IZ, has been published. Busan IZ…

Awards, accolades and honors We saw 51 BFS students sit for 124 AP exams this…