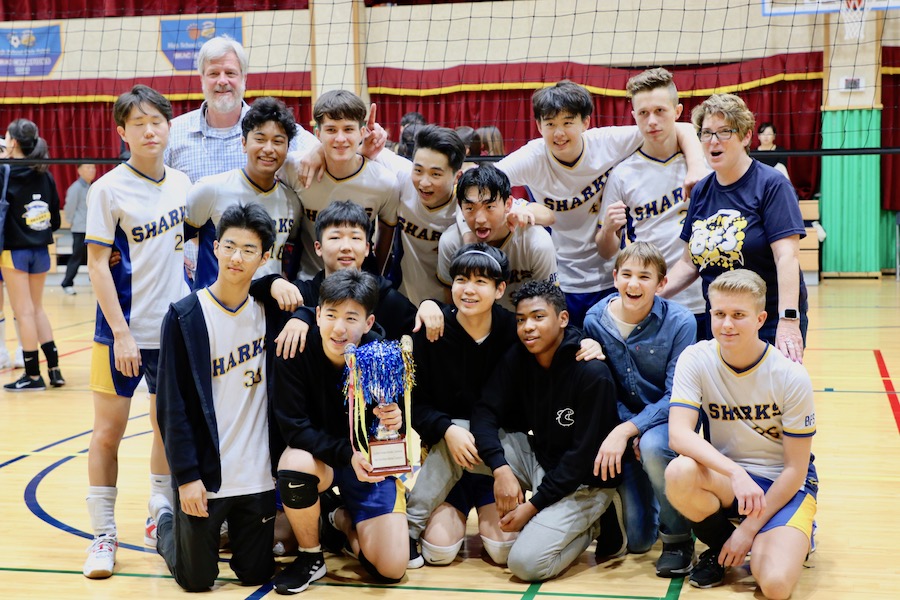 In riveting fashion, the High School Boys volleyball team stormed back to capture the SKAC volleyball championship.   After cruising along for much of the first set, the boys hit a roadblock and allowed DIS to claw their way back. They ended up losing  a heartbreaker, 32-30. This did not crush them however, as it would most, but only motivated them to dig deeper. The boys won the second game 26-24 in another nail biter.  The third and final game saw each team battle back and forth until DIS pulled away and held a seemingly insurmountable lead of 13-8, two points away from victory and the championship.  Timeout was called. As the players huddled together, the common theme of ‘one point at a time’ circled amongst the players. This one was far from over. Hope, in the darkest moment springs light. The boys emerged from the timeout with confidence and a will to win. BFS held serve and Sergei began what will go down in BFS lore as one of the greatest comebacks ever.  BFS went on to score six straight points to make it 14-13 BFS. With match point to go, Sergei served it over the net and a volley took place. William made a beautiful save to keep the volley alive and eventually nailed it home after receiving a sweet set from Zenith. The ball sailed off the opponent’s arm, and landed out of bounds, right at the feet of our esteemed Athletic Director Mr. Galles, who picked it up and slammed it off the floor as pandemonium ensued.  Another banner was going up in the gym! And in amazing fashion after a gallant 15-13 comeback. Seven straight points to seal the deal. The opponents stood dazed and confused. So close but yet so far away. On this special day, the indomitable spirit of BFS could not be overcome.

Our girls’ team entered the tournament as the number #1 seed following their unbeaten record from the Divisional tournament held in September where our lady sharks went 4-0 in match play.  In the Finals our girls swept their round-robin opponents by tallying 3 match wins against 0 losses. In their semi-final match, BFS was once again victorious and entered the championship match with an unblemished 8-0 record. As defending SKAC champions our girls were aiming for a repeat championship, but on this day it was not meant to be as our Lady Sharks fell in two sets to BIFS by scores of 20-25 and 17-25 ending their championship hopes.  What a great season, the ladies losing only one match all year.

Congratulations to all of the girls and their coaches for their hard work, dedication, and open display of their Shark P.R.I.D.E. (perseverance, respect, integrity, discipline, and effort)!

Next up……….our HS girls and boys volleyball teams will now travel to Jeju Island in two weeks to participate in the KISAC South High School Volleyball Invitational Tournament hosted by Korea International School and St. Johnsbury Academy.  This tournament looks to be a very exciting opportunity for our teams to continue to show growth as they work together in pursuit of excellence on the court.  Good Luck SHARKS!

Grade 1 goes to the Zoo

Roar! Chirp! Splash! On Wednesday, May 4th, first grade went on a field trip to…

On Friday, 9/28 at 3:40 pm, National Honor Society had an induction ceremony to welcome…

Back to School Orientation: what a turnout!

This year's back to school orientation probably had its highest turnout ever. And we like…

Time to congratulate to our next year's Middle School Stuco leaders: Co-Presidents: - Sona -…