On Saturday, October 14th BFS hosted the Southern Korean Athletic Conference (SKAC) HS Girls Volleyball Championship Tournament. The day started with the completion of round robin play, whereby each team played the two schools they did not play at the Divisional tournament held in September.  Once the round robin was completed all 6 teams were seeded (1~6).

Quarterfinals
BFS was awarded the 4-seed and faced the 5-Seed Handong International School (HIS).  BFS won the first game of the match by a score of 25-18.  HIS took control of the second game and led at one point 20-11.  BFS climbed back into the second game by rallying to tie the game at 24-24.  However, HIS held on to win the match 27-25, forcing a third and deciding game.
In the third and deciding game of the quarterfinal round, BFS outscored HIS 15-3 to advance to the Semi-finals.
Semi-Finals
In the semi-finals BFS faced the leagues top seeded team the BIFS Bears who went through round robin play undefeated at 5-0 and had an overall game record of 10-1.  In the first game of the series BIFS proved to be too strong for our BFS Sharks as they won the first game by a score of 25-19.
In the second game of the match, BFS buckled down and fought their hearts out in a very close game that saw many lead changes throughout the entire game.  The good news is that BFS would not give up and just kept playing with the will to win……..and finally did by a score of 28-26, handing BIFS only its second lost game of the entire season.  In the third and final match the Sharks would not be denied a chance to knock off the Bears and head to the championship match.  Final score……BFS 15 – BIFS 13!!
Finals
In the championship match of the SKAC HS girls volleyball Finals, BFS faced the 2-seed, Daegu International School (DIS).  In what seemed to be the BFS way…………our Lady Sharks fell behind once again by dropping the first game of the match.  In that first game, BFS got off to a really good start and led DIS by a score of 12-5.  However, DIS rallied, and came all the way back to win the first game of the championship match by a score of 25-20.
Behind once again, it was time for the Lady Sharks to tighten up their laces and pull together as a team. In the second game the Sharks rolled over the DIS Jets by a score of 25-9.  The momentum had shifted, and now there was one final game to determine the 2017 SKAC HS Girls Volleyball Champion!
In the third and final game, our BFS Lady Sharks would not be denied………winning the final game by a score of 15-5 and earning the school’s first ever HS Girls Volleyball Championship!
Congratulations to Coaches Lee and Gates and all of our fabulous Lady Sharks for such a fantastic achievement.  We could not be more proud of all of you!
Athletics Director Mr.Galles

The Busan Foreign School high school boys had an outstanding season this year!  The men came together as a team and learned next level skills that helped them be the ‘team to beat’ in the league.  At the finals at BIFS, the boys came in strong, and team leaders fielded balls from a very competitive groupings.  The BFS men worked hard against tough odds and came into 5th place in the league with heartbreaking losses and solid scoring opportunities.  Coach Fox and Coach Dickinson are very proud of the foundational skill level improvement,  students taking in the challenge to up their game to a competitive level, not to mention the formation of a tight team bond and exemplary sportsmanship on and off the field.  We are looking forward to taking these lessons to the next tournament in Jeju. 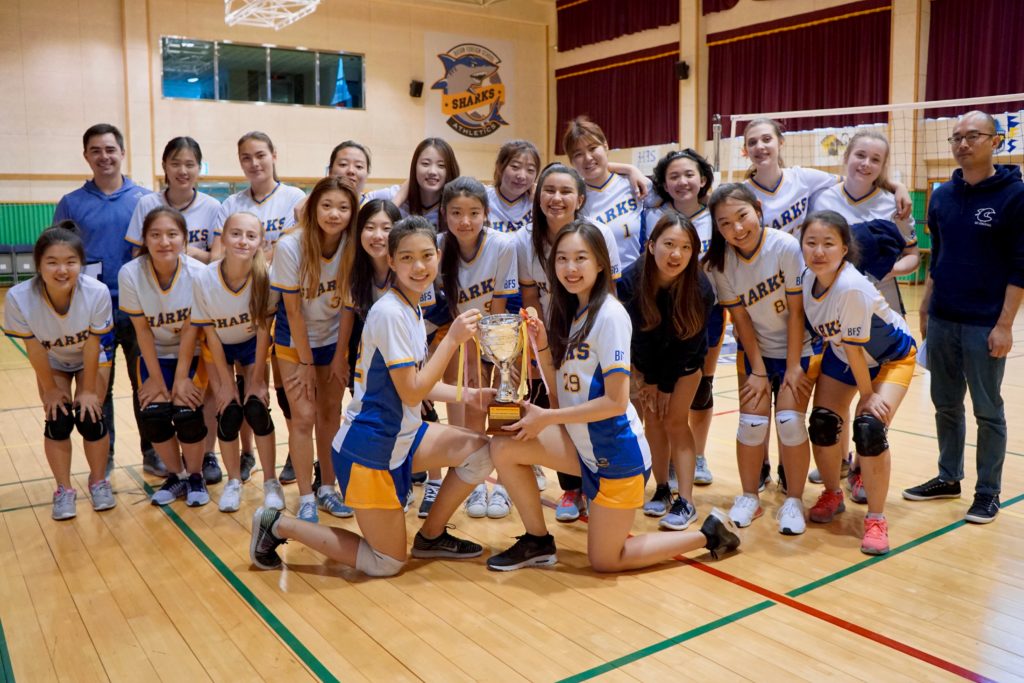 For the first time in the SKAC history, a MS and HS Science fair was…

On Thursday, October 20, our HS volleyball teams competed in the SKAC finals. The girls…

Congratulations to the winners of the "BFS Shark Student of the Month - Socially Conscious:…

On December 3rd, straying from tradition, the MS/HS Orchestra and the HS Student Council held…