BFS Girls B-Team
Our BFS girls B-team won their first match of the day by a score of 1-0 over the ISK B-team. Jaelle scored the winning goal in the first half and the Sharks held on with great defense to prevent ISK from scoring any goals.
In the B-team’s second match of the day they lost to HIS 0-3.  The match was much closer than the score and this result was a good one for our girls B-team playing against a much older and bigger squad from HIS.
In the third match of the day our girls B-team was beaten by Hyundai Foreign School (HFS) by a score of 0-2.  Again, a pretty good result for such a young BFS B-team.  The girls hustled well, increased their knowledge of the game and improved their skills throughout the season. Congratulations to all the BFS B-team girls on an enjoyable futsal season!
BFS Girls A-Team
Our girls A-team started off the day with a 7-0 win over ISK, then followed that in their second game with a 1-1 draw against DIS.  That match saw DIS take a 1-0 lead in the first half, and our BFS Sharks battled hard and kept pressing to get that equalizing goal. Finally, midway through the second half the Sharks scored to even the match. Now, with only a few minutes remaining the girls pressed hard to get the winning goal and had several close chances but DIS held on against the immense BFS pressure and the game ended in a draw (1-1).  Based on points our girls A-team won their pool and went onto the semi-finals.
In the semi-final match it was a rematch of a Divisional game against HIS where our girls beat HIS 1-0 in a tight battle of two very evenly matched teams.  This semi-final game was no different.  Our girls conceded a goal midway through the first half and were down 0-1 at halftime.  Not to be denied, our Sharks A-team scored the equalizing goal midway through the second half.  Again, we brought a great deal of energy and passion in every attempt to win the game in the final minutes and had several chances to win, but the ball just nearly missed each time. This sent the game into a penalty shoot out, whereby each team received 5 penalty kicks to determine which team would advance to the Finals. The penalty kicks came down to the very last kick as BFS was trying to tie the penalty kick score and send it to sudden death. Unfortunately for our Sharks we couldn’t manage to find the goal and lost the penalty kick shootout 0-1. It was truly a heartbreaking loss for our undefeated girls A-team, but we are very proud of the girls and they had an amazing season.
Overall our BFS girls A-team won 4 matches and tied 2 matches, and lost the final match (draw 1-1) on penalty kicks.  For the season our girls A-team outscored their opponents 19-3 in 6 games played.  Angie scored 15 goals and Lilly scored the other 4 goals for our team. All team members contributed to our team’s success by playing strong defense, sharing the soccer ball, and creating scoring opportunities for each other!  Congratulations to all the girls on the BFS Shark futsal team on an outstanding season of many successes! 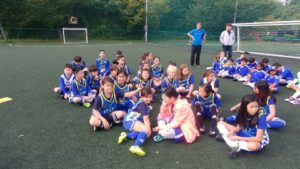 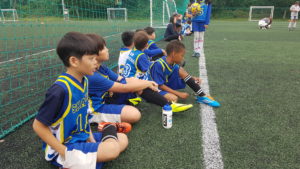 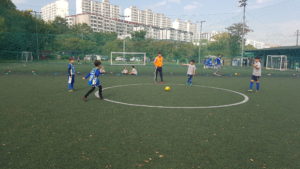