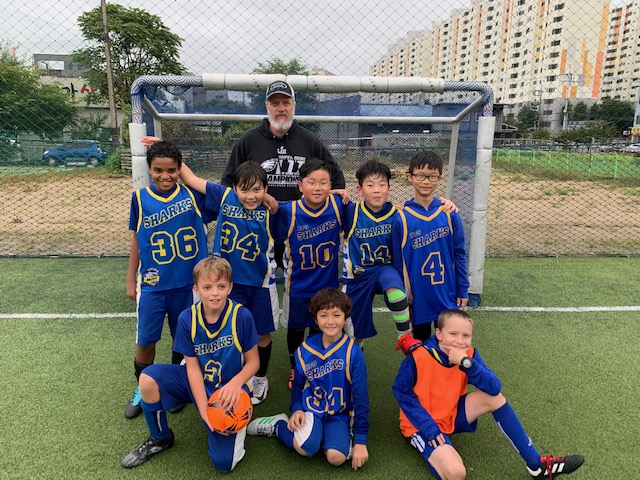 On Friday, October 18th 2019 our ES futsal teams traveled to Daegu to participate in the Southern Korean Activities Conference Finals tournament.
On an overcast and rainy day the players hung in there and persevered through the cool damp weather.

After a rough start to the day with a couple of lopsided losses, our boys teams started to gather momentum throughout the day and each team notched a couple of wins finishing the day on a high note. The experience the boys gained will help them continue to grow and develop as a team.  Congratulations to the boys’ teams on a fun and rewarding season. Our boys A-team finished the season with a 5-4 record.  Our boys B-team finished the season with a 1-5 record.
Our BFS girls futsal teams continued to play very well and finished the season strong.  Our girls B-team won two matches and lost two matches at the Finals. Both of their losses were against A-team.  For the season the B-team went 3-3-1 with all three of their losses to A-teams, while winning all of their B-team matchups. Congratulations to our B-team girls!
Maggie, Mina, Trina, Nikole, Shiubin, Sandra, Irene, & Elena
The BFS girls A-team capped off a remarkable season by going undefeated with 7 wins and 0 losses on their way to winning the SKAC ES Futsal Championship based on their undefeated record.  The A-team girls outscored their opponents 50-5 on the season.
Leading scorers on the season were:  Amber-16, Maria-14, Sophie-10, Hadassah-7, Grace-2, and Kristina-1.
Sophie and Hadassah who split the most time playing goalkeeper this season did a great job of protecting the net.  Ruby played a very strong defensive position for the team, while Grace & Mia also played very well and contributed nicely to their team’s success in all areas.
By Mr. Galles
Athletics Director
Foreign SchoolFutsalInternational SchoolInternational School KoreaSKAC
Share This
Related Posts