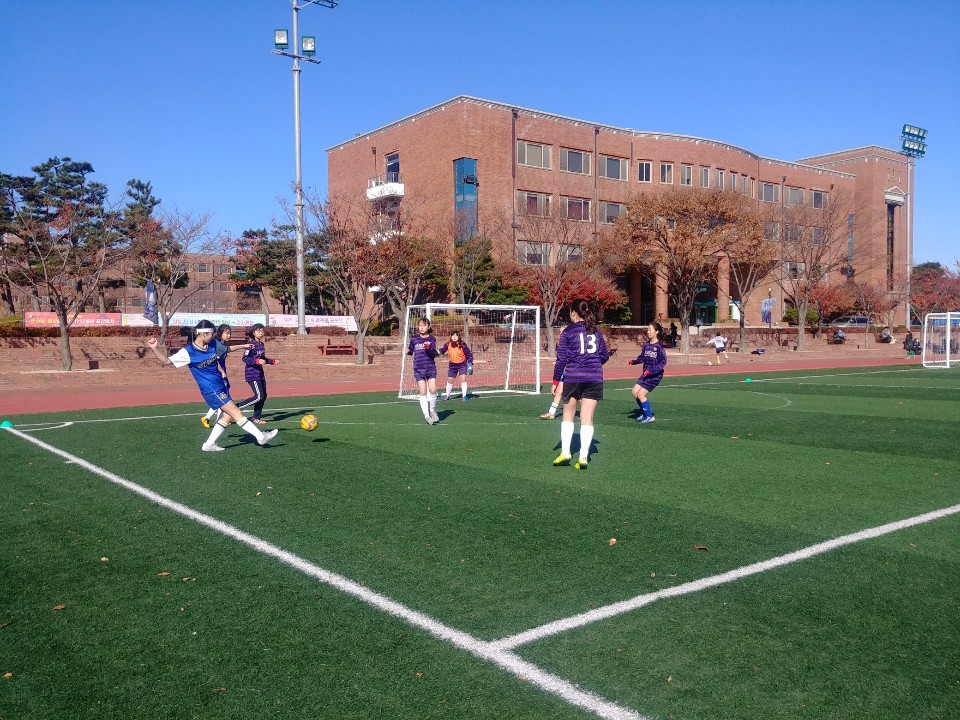 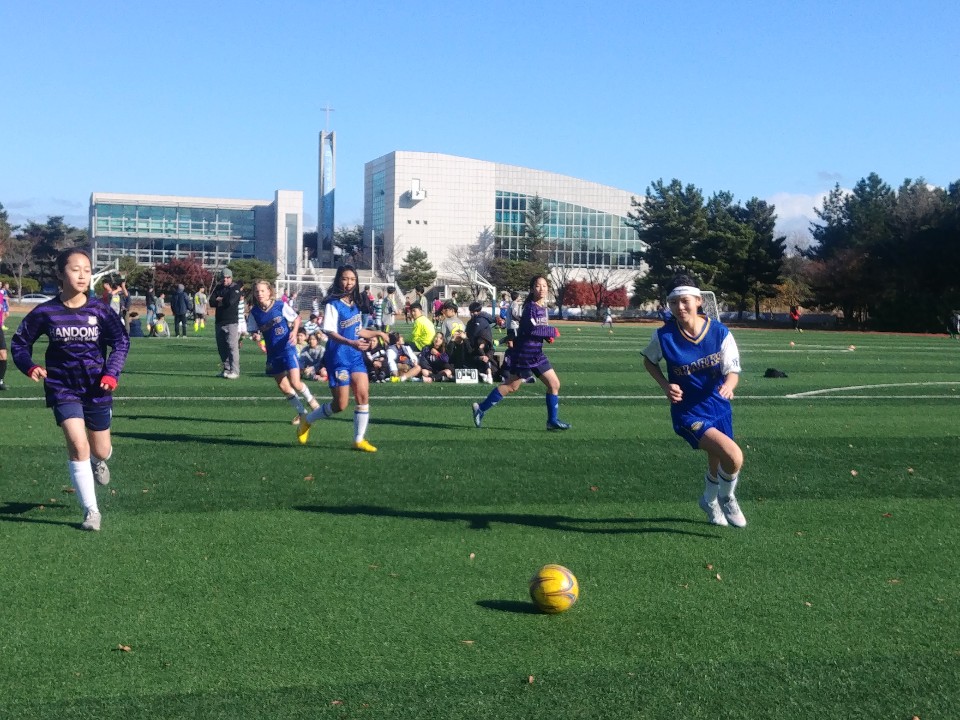 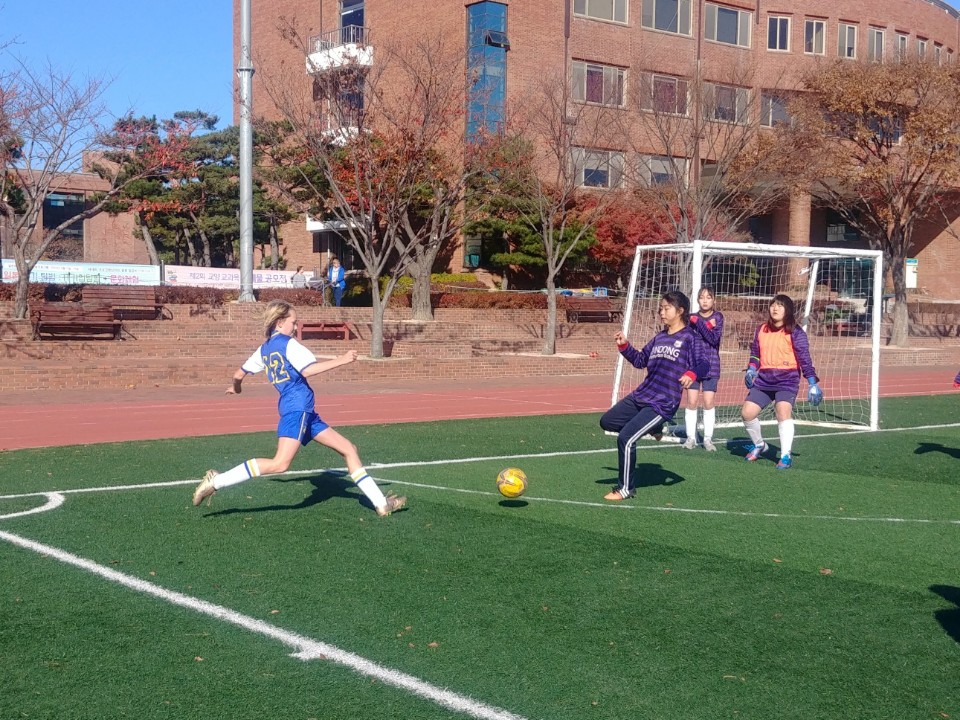 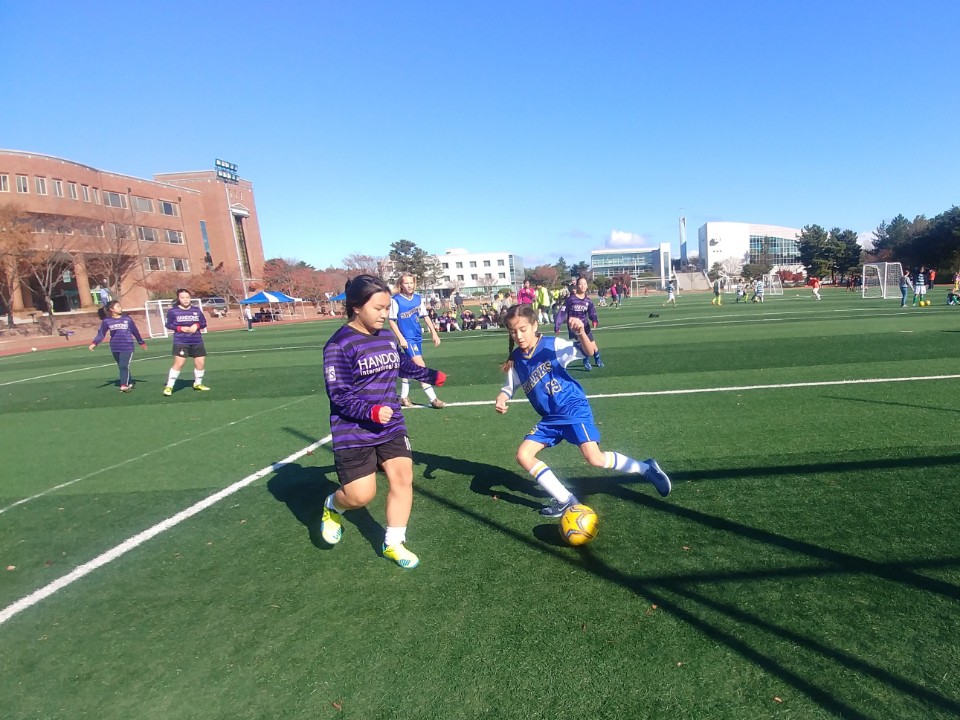 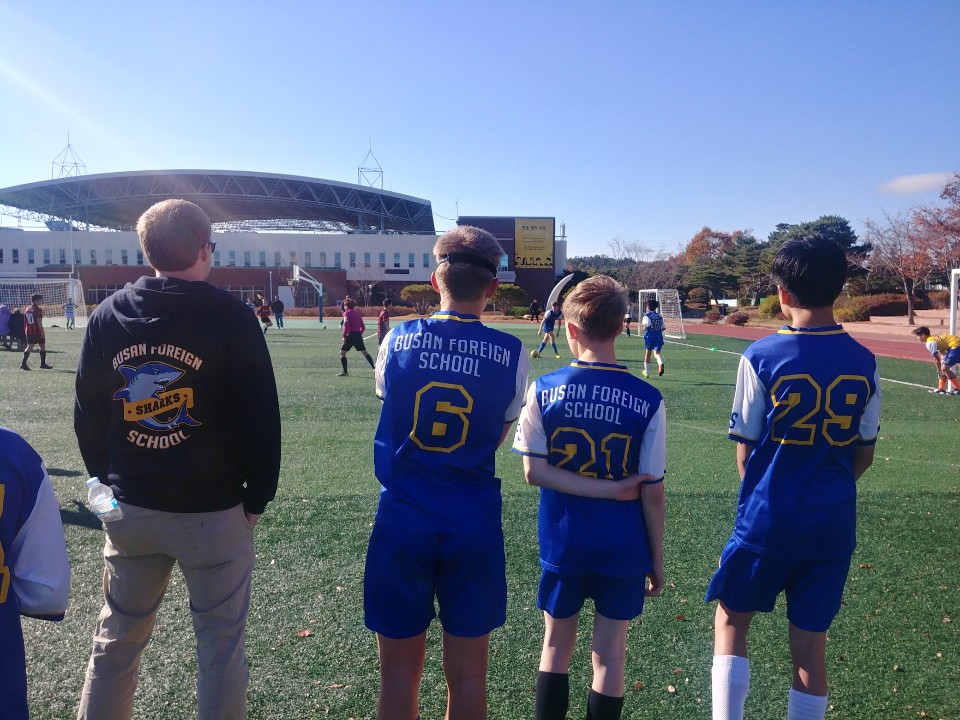 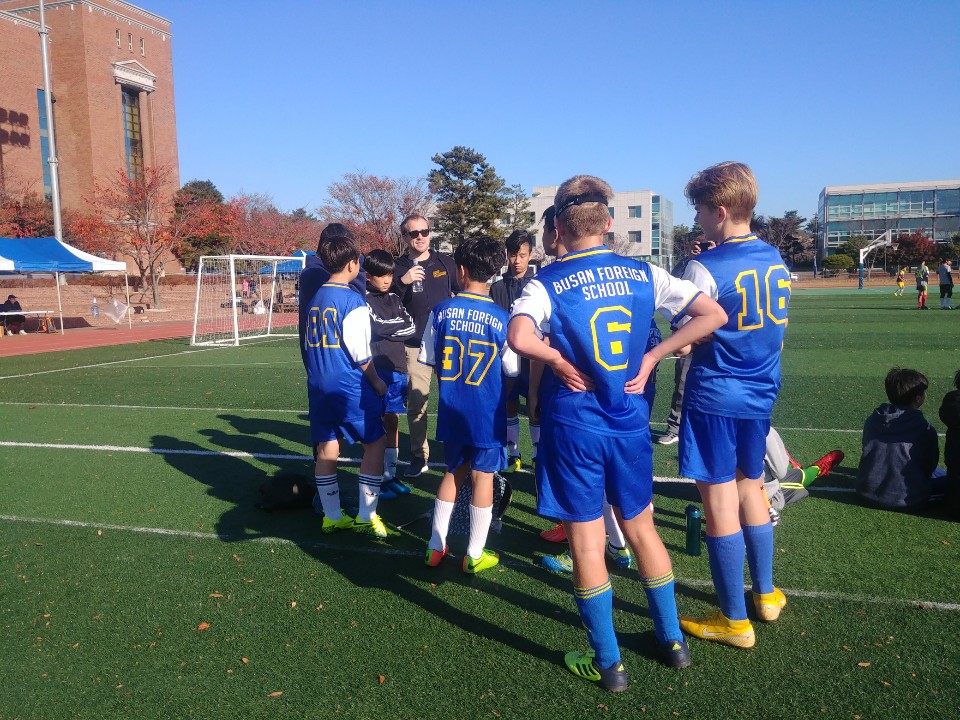 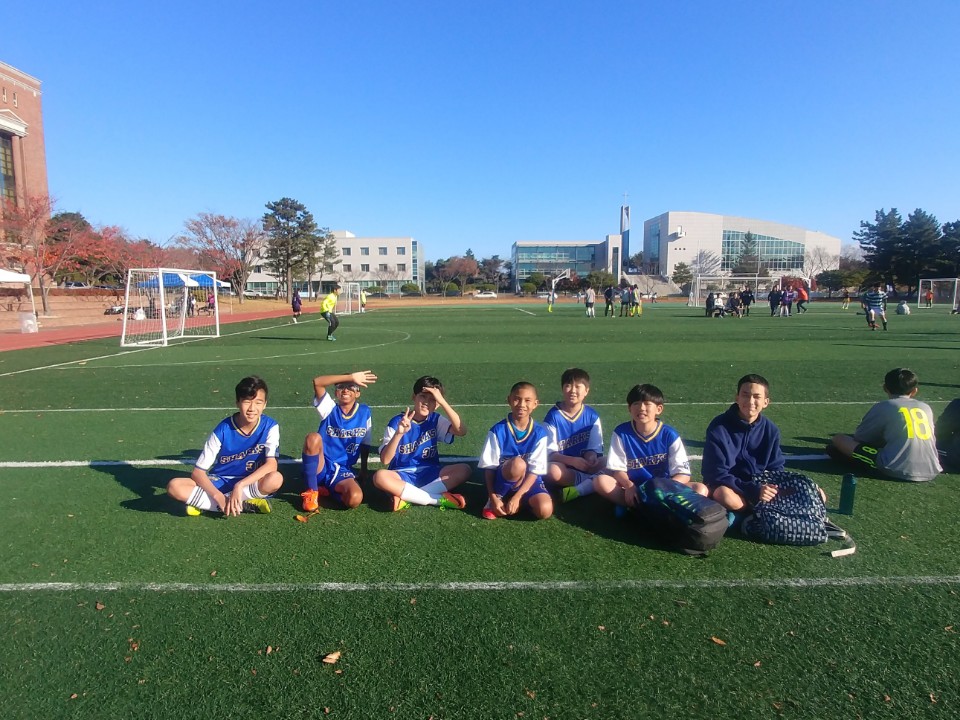 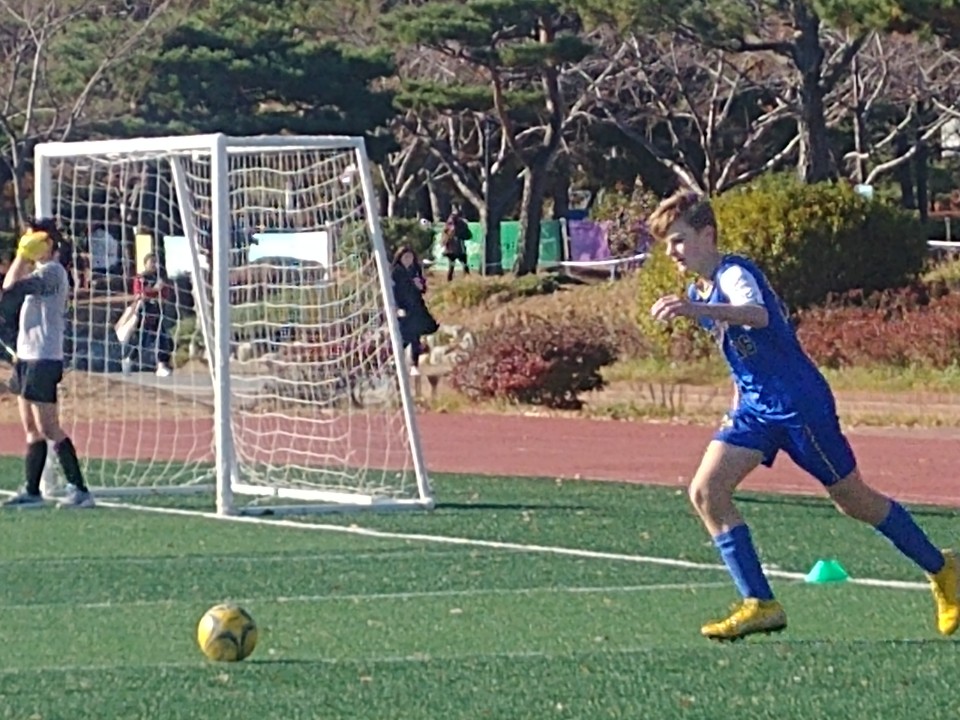 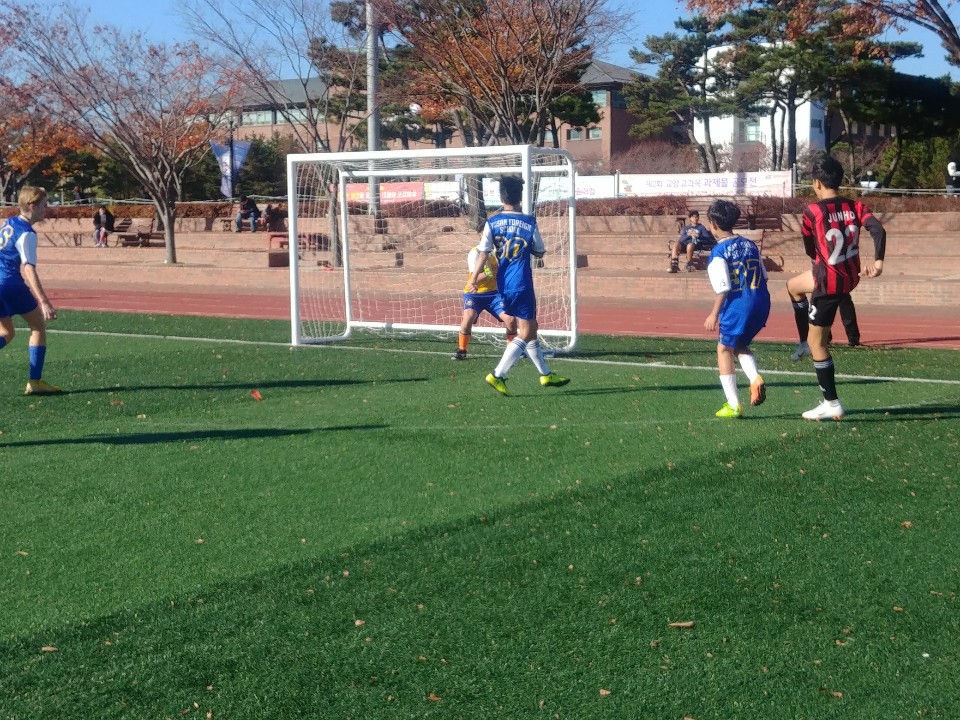 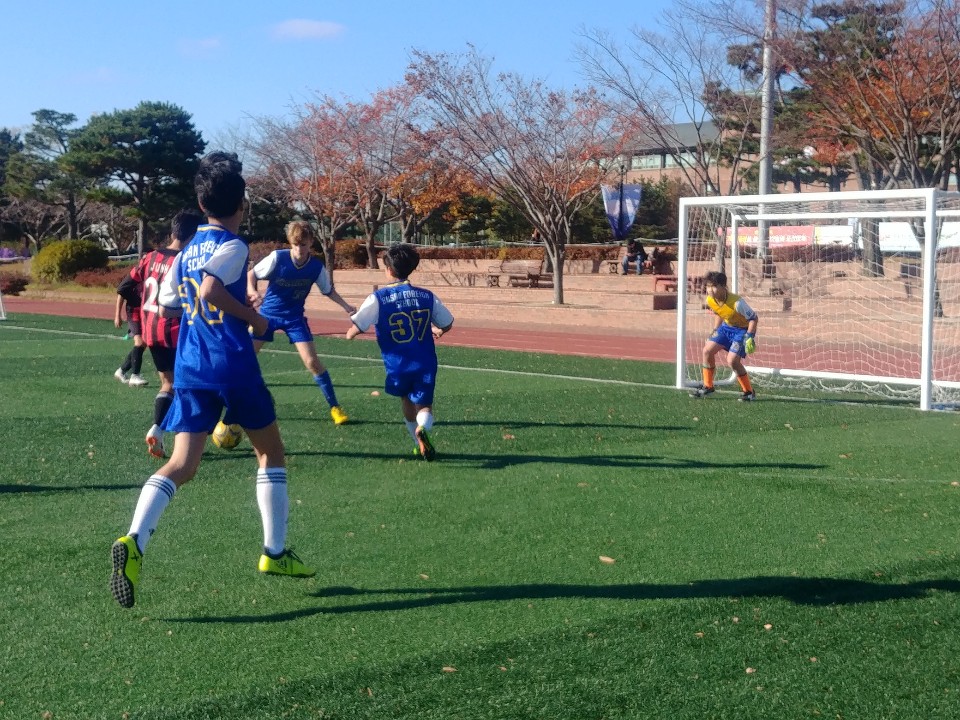 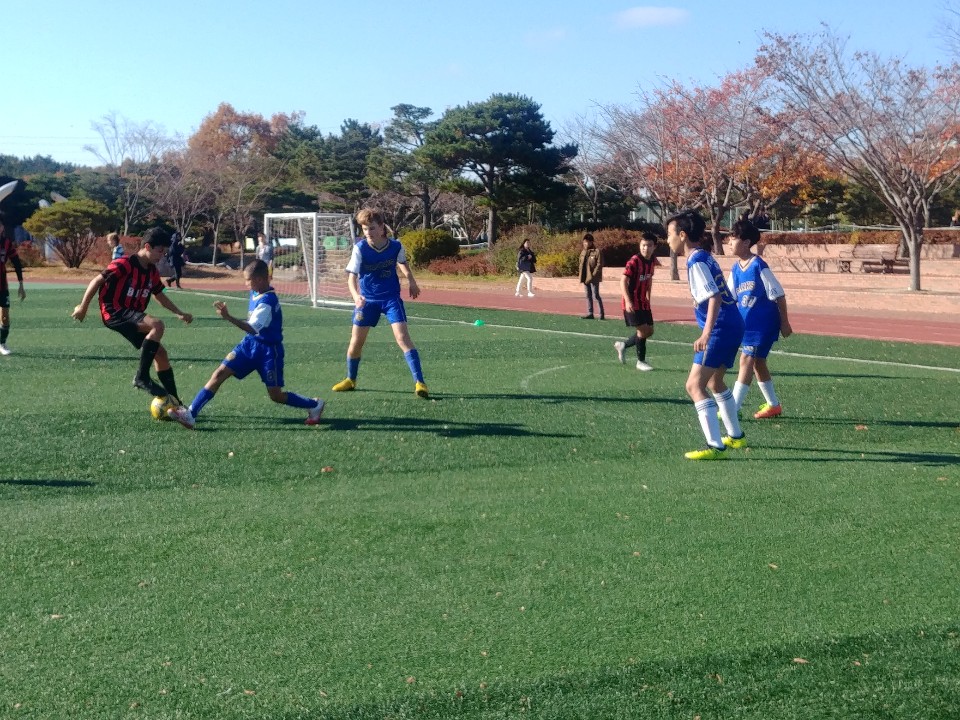 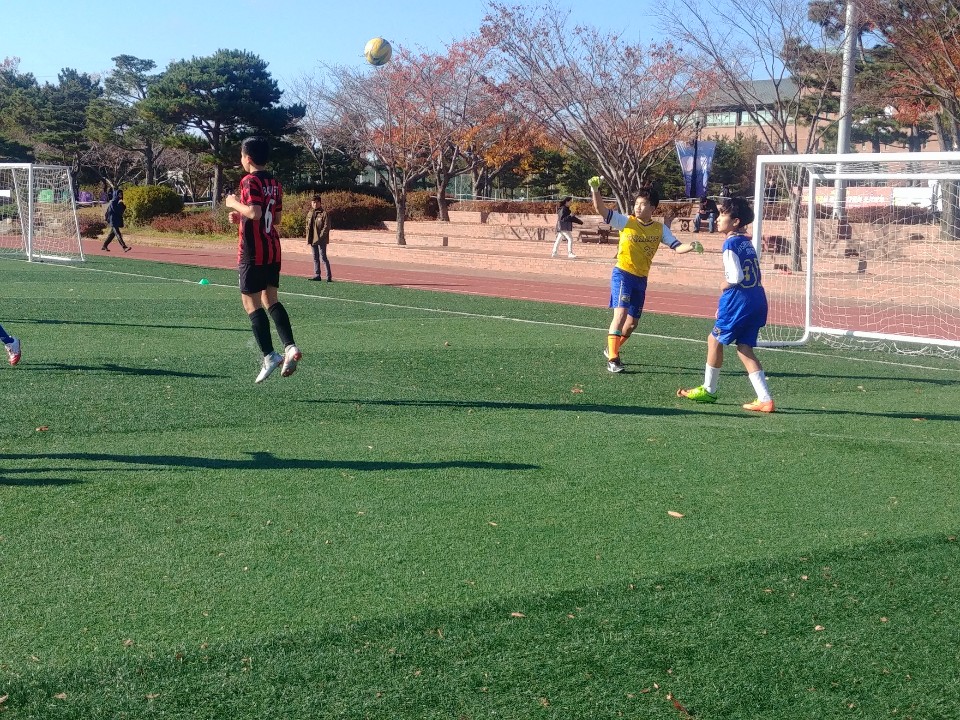 In our first match of the day our girls played against the host school HIS. Having previously tied HIS 3-3 in the Divisional tournament held last month in October, the girls were determined to get off to a fast start.  The Sharks scored a couple of goals in the first half and a couple more in the second half to take a 4-0 lead well into the second half. HIS scored one goal down the stretch, but the Sharks held on with great defense and did not allow HIS to get any closer, ending the match with a 4-1 victory!

In the second match of the day our girls played against GIFS. The GIFS squad was a determined group and they challenged our girls well in the first half by controlling the ball and time of possession in our half of the pitch.  At halftime the score was tied at 1 apiece. We regrouped at halftime and focused on flipping the pressure to the opponent’s side, and eventually it paid off with the winning goal scored with about 4 minutes to play in the game.  The final score was BFS 2 GIFS 1. This win sent our girls through to the semi-finals.

In the semi-finals we had a rematch against GIFS because they won their quarter final match against BIFS.  This semi-final match was a very closely fought match the entire way and our girls were dominating the field in terms of shots on goal and time of possession on the opponent’s side of the field. However, as luck would have it the score was still only tied 1-1 late in the second half. Our defense was very solid and GIFS scored its only goal on the one and only real shot attempt they had on goal for the entire game. The Sharks kept attacking and shooting but the Tigers fended off the barrage of shots.  Late in the game with about 2 minutes remaining the Sharks finally broke through with what appeared to be the winning goal! Unfortunately, the official’s view on the play put her at a disadvantage and she could not determined whether the ball had crossed the goal line or not. Our girls were elated and the Tigers were devastated, but in the end the goal was not allowed. What a terrible misfortune for the team! The game ended in a 1-1 tie and off we went to a penalty shootout to determine the winner! The shootout was very tense and exciting, but, in the end our Lady Sharks were outscored 0-1, sending GIFS on to the championship while our girls headed to the consolation match for 3rd place.

In our fourth and final match of the day we had a rematch against HIS. Our girls, understandably, were not full of energy and passion due to the heartbreak they endured just moments before, but they rose to the occasion battled with determination to end the season with a win.  After falling down 0-1 in the first half we tied up the score heading into halftime at 1 goal apiece. Midway through the second half we conceded another goal to HIS and fell down by a score of 1-2 with about 5 minutes remaining. We had only lost one match all season (in a penalty shootout), were we going to lose two matches in a row to end our season in 4th place?  NO WAY! Our mighty MS girls team ramped up the pressure and played with a sense of urgency to tie up the match 2-2 with just around 3 minutes to play. We knew we had them under all kinds of pressure so we just kept pushing and shooting and attacking……… and scored the game winner with about 1 minute to go in the match, prevailing with 3-2 victory and ending the season on a high note!!

Last year BFS was not able to put together a full squad and therefore were unable to participate in the league tournaments in 2017. This season was a great accomplishment for a brand new team in their first year working together. Moving forward, we are excited about this group of girls (and others that may join) teaming up again for the upcoming MS volleyball and MS basketball seasons that will take place in the second term.

Congratulations to all of our girls on an amazing season with a final match record of 5 wins 1 loss and 1 tie. On the season our girls outscored their opponents 26-11.

The boys knew they had a long day ahead of them, and, as they were seeded in the top division  (of three pools), they were guaranteed a spot in the quarterfinals. Knowing that the three rounds of pool play would not determine their fate, the team decided to share playing time evenly to make sure that everyone played important minutes and gained valuable experience. It was tough going as the Sharks only managed to score one goal in pool play, but staying rested and sharing the playing time amongst all players proved to be important later in the day.

Their strategy paid off. After a hearty meal and a bit of downtime, the boys plowed through ISK in their quarter-final match, 6-0. Nikita scored a hat trick, and supporting goals came from Misha, Michael, and Kirill.

The boys’ earlier singular goal in pool play (by Nikita) against HIS turned out to be a foreshadowing. They faced the same team again in the semifinals. The boys had a rough start, going down 0-2 before Nikita got one back. The goal rallied the team, and they continued their comeback, eventually leveling the match at 2-2 then taking the lead midway through the second half  3-2. In the last few minutes of the match, however, HIS snuck one in to tie things up at 3 apiece, leading to a penalty kick shootout to break the tie and send the winner to the championship match. In a clutch gametime decision, Misha stepped into goal to defend the penalty shootout attempts. The first shots for both teams were blocked. Then, Nikita nailed one right into the corner, putting BFS up 1-0. HIS got one right back though, tying up the shootout. Kirill was up next, and he smashed another in the corner, bringing the boys to a 2-1 lead. The whole team was holding their breaths for every single kick, waiting for the shot from HIS to tie it up—but it never came, as Misha blocked the final attempt by HIS. The boys exploded into celebration—they were guaranteed 2nd place, and had only 1 match left to claim the title.

BFS faced the legendary BIFS squad in the finals. The BIFS boys were known for, among other things, beating other, less-prepared teams by 10 or even 20 goals in a single game. BFS was off to a strong start—they contested the field well, and early goals by both teams put the game at a tight 1-1. Soon after, another goal by BIFS began a landslide that didn’t stop until they were up 7-1. With only ten practices in the entire season, though, BFS stood against the onslaught, and Kirill even scored a late nutmeg, bringing the final count 7-2 BIFS. Even being 6 goals down for most of the game, BFS kept their heads high and held fast against a vastly more experienced team.

Congratulations to the boys on a short, but excellent season with a final match record of 4 wins, 4 losses and 1 tie.