On Friday September 9th, the HS Student Council hosted the first spirit rally of the year!

It was an event full of balloons, music, and an exciting relay race not shy of messy games! Led by senior class president Ricky Ahn and senior class representative Daniel Kim, the event engaged all BFS students from the youngest in early childhood to the graduating seniors.

It began with a warm welcome by principal Mcfarlane, and continued with Ricky and Daniel modeling the games before the race. There were two teams with a class representative from each grade in each team. The first station in the race was a sack race with the K5 students. Then, 1st graders joined the 2nd graders on a three-legged race finished by a snack eating contest. After that station the 3rd graders and 4th graders had to pop a balloon without using their hands or feet. Then, the 5th graders joined the 6th graders for a get-dizzy-and-catch-the-ball game. Following involved the 7th and 8th graders in a game where they had to “un-melt” a frozen t-shirt and wear it. Then, the 9th graders had to eat an entire lemon – skin and everything! Next, the 10th and 11th graders teamed up for an activity where they had to collect small objects with “giant chopsticks.” The end of the relay race was a hilarious game where new staff members, who were blindfolded, sat behind two senior students and fed them yogurt! It got quite messy! Each member of the winning team received a chocolate medal. The event was a beautiful picture of all grades coming together as one. It was a beautiful picture of the community here at BFS. 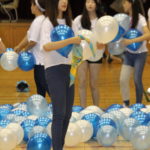 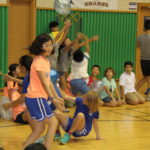 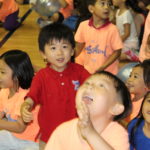 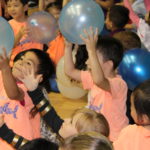 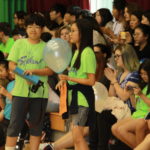 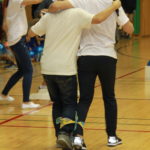 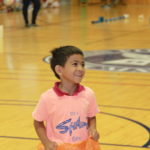 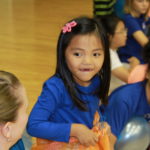 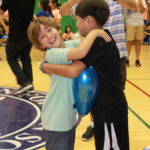 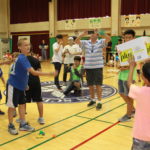 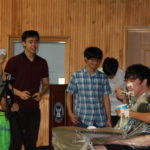 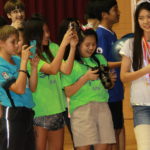 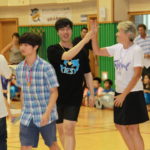