On December 3rd, straying from tradition, the MS/HS Orchestra and the HS Student Council held a fundraising orchestra concert for an orphanage in Amnam-dong. The orphanage we tried to support also has a school, Aloysius Technical High School. All of the students who attend this school are orphans, and are also very interested in orchestra. HS student council and Dr. Kim hoped to make a meaningful effort to support the students who are interested in orchestra, but in less fortunate circumstances. The HS Student Council promoted the concert by making posters, selling tickets, and using SNS to constantly advertise the concert. During the day, HS Student Council also sold flowers for the audience. Thankfully, the concert was a success, and a total of 671,000 won was raised that day.

The concert was held twice in one day; once during the school day for the students, and again at night for the teachers, parents, and orphanage students. The HS Student Council sold tickets and flowers, while the Orchestra worked very hard to show a great performance. Several people helped out with the charity concert; for example, Mr. Mijares served as our enthusiastic host for both shows. Teachers and parents generously donated to the donation box and contributed to the cause. The palpable support and school spirit was great to see from the entire BFS community. 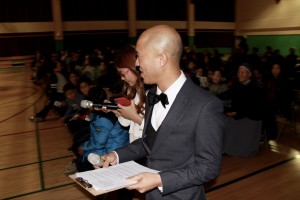 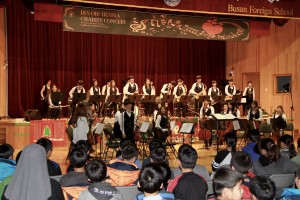 BFS Participates in the SKAC MUN on December 10th

Congratulations to all delegates who participated in the SKAC Model United Nations on Saturday, December…